A great loss of potential exists when immigrants are kept out in mass in a First World country.

How would the United States be affected if the endless list of immigrants had been denied entry? Leaders, artists, entrepreneurs, thinkers, and pioneers such as Albert Einstein, Nobel Prize in Physics; Madeleine Albright, US Secretary of States; Hamdi Ulukaya, Owner of Chobani yogurt; Junot Díaz, Pulitzer Price for Fiction; Mikhail Baryshnikov, Artistic Director of American Ballet Theatre; and Hakeem Olajuwon, Basketball Hall of Fame who by their presence and offering of their talents have shaped the nation into the extraordinary society that it is.

The foundation to this segment of “Reality & Imagination” is driven by the possibility of ‘loss potential’ when immigrants are refused legal entry. It is also an attempt to bring attention to the risk of such a blanket policy as is afoot in the United States.

From the mix of the tide and sand, to the silhouette and shadow of the previous segments, to the marriage of Printmaking and Photography in this segment, there is always this duality that’s present—and what’s created is always greater than its parts.

The merging in this segment of the two different mediums: printmaking techniques and photography is an expansion on the idea of the two cultures. Multiple copies from a carbon copier are made of a photographic image. Using a natural solvent, this image is then transferred to an archival paper by manually running it through the press. At each instance, a fresh copy of the same image is reapplied to the same sheet of archival paper in the same manner until the desired goal is achieved. This could take as many as seven to ten applications. The end result is neither a photograph nor printmaking, but fluidly both. This fluidity combined with the image title will, I hope, give a greater sense of who an immigrant is and what is possibly loss in keeping he or she away. 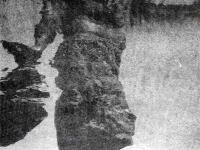